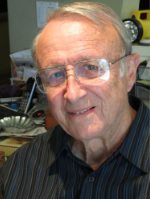 Jack Shepard has been involved in track and field for more than 75 years. His involvement began in 1941 when he was a pre-teen, as an on-the-field helper to his father, an AAU official. Shepard was an AAU official in the 1950s and 60s before becoming an announcing and TV booth assistant from the 1970s through the early 2000s. At Track and Field News, he has been the Boys HS editor since 1968 and the publisher and editor of High School Track since 1980 – the definitive resource for prep all-time and annual performance and performer lists.

Shepard is a member of TAFWA (Track & Field Writers of America) and FAST (Federation of American Statisticians of Track). Amongst his honors are inclusion in the Golden West and International Prep invitational halls of fame (1988), the Pathmark Service Award (1993), the FAST statistician of the year (1995), Penn Relays Honorary Referee (1998) and the Doug Speck Award by the NSAF (2015). In real life, Shepard spent 36 years working for an oil company in California, New Mexico and Texas.