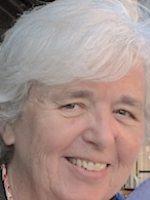 Marjorie Larney began her life in track and field in 1948 at age eleven, running relays with the NYC Police Athletic League. One of her relay teammates was the inspirational 16-year old Mae Faggs, a 1948 Olympian. As Larney matured, she was taught the javelin, discus and shot by the PAL’s coach, Sargent John P. Brennan. He told her that Mae had made the Olympics by following his instructions, and if she did the same, she would make the next Olympics. By 1952, Marjorie had done just that – making the Helsinki javelin finals as the youngest athlete ever in an Olympic javelin competition. She also made the Melbourne Olympic javelin final in 1956 and competed twice for Team USA at the Pan-American Games – in 1955 in Mexico City and winning javelin silver and discus bronze in Chicago in 1959. From 1951 to 1960, Larney won a total of 10 national titles, seven in the javelin, two in the shot and one in the discus. A back injury ended her athletic career in 1961.

In 1962, Larney joined the Peace Corps, serving four years in Thailand. She coached the Thai national team, taught at the Physical Education College in Bangkok and – being fluent in Thai – conducted track and field workshops countrywide. Returning to competition as a Masters’ athlete, Larney won the discus and the shot and was second in the javelin at age 50 at the 1987 nationals. She established the Western Region Masters’ Women’s shot put record at age 60. Larney was elected to the Helms Hall of Fame in 1964 and the Queens College Sports Hall of Fame in 2013.