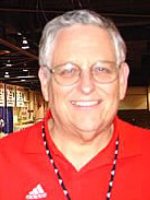 Mike Kennedy, a Glendale (Ca.) native, graduated from California in 1964 with a major in European history and a minor in geography. A summer job serving beer samples and administering questionnaires in shopping centers led to work with Schlitz Brewery in product evaluation. For two years, Kennedy supervised the company’s field operation in that department, traveling the U.S., Spain and Puerto Rico. But the pull of Southern California and track and field (particularly high school) led him back to his roots. One evening in 1970, he walked into the Los Angeles Times to get the latest sports section and point out a few errors on the high school sports pages. The prep editor offered Kennedy a part-time job … and thirty-seven years later he walked out the door, with quite the resume.

While covering prep sports and manning the agate desk (results) at the Times, Kennedy’s T&F expertise became so noted that in his spare time he has served for the past 35 years as the girls’ national high school editor with Track and Field News He is currently working on a streak of 57 straight California state meets and has attended six IAAF World championships, nine IAAF World Junior championships and seven IAAF Youth Championships. Kennedy became known as the foremost U.S. expert in the latter, compiling statistics for leading national contenders. For relaxation he favors books by Michael Connelly and music by Errol Garner.